New MSME definition has a message: No longer have to stay small to avail benefits: 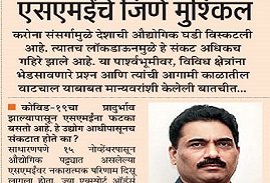 IN THE first part of its latest economic stimulus package, the government Wednesday broadened the definition of Micro, Small and Medium Enterprises (MSMEs) by revising the limit of investment in machinery or equipment and introducing a “turnover” criteria — a reform measure that seeks to reverse the traditional policy bias in favour of units staying small in order to qualify for benefits. In addition, the government has disallowed global companies from participating in tenders up to Rs 200 crore, earmarking that space exclusively for Indian companies.

“The definition being changed is done in the favour of MSMEs. There has always been this fear, among successful MSMEs also, that if they outgrow the size of what has been defined as an MSME, they will lose their entitled benefits. This is why MSMEs like to remain within the definition rather than grow. With the revised definitions of MSMEs, they will not have to worry about growing their size and can still avail benefits,” Finance Minister Nirmala Sitharaman said.

For medium enterprises, the investment limit has been doubled for manufacturing enterprises from Rs 10 crore to Rs 20 crore and quadrupled for services from Rs 5 crore to Rs 20 crore, in addition to the turnover criteria of up to Rs 100 crore for both sectors in this size. Read | Govt’s cost this year: Rs 25,500 crore The revised parameters come almost two years after the Centre first brought the MSME Development (Amendment) Bill, which aimed to change the definition purely on the basis of turnover. However, following opposition from some sections, including RSS-backed Swadeshi Jagran Manch, the Bill was put on the backburner. The Manch had said that basing the definition purely on turnover would disincentivise investments by MSMEs.

The main thrust of Finance Minister Union Sitharaman’s announcements has been the massive increase in credit guarantees to the MSMEs. Reacting to the latest move, Chandrajit Banerjee, director general, Confederation of Indian Industry (CII) said: “The most important announcement with long term implications is the quantum jump in the definition of an MSME, which had not been changed since the MSME Development Act of 2006 and was long awaited. Along with the decision to not have global tenders for government procurement up to Rs 200 crore, the redefinition will assist the MSME sector in growing and emerging as a vibrant and dynamic sector, contributing to self-reliance and employment in a big way.” However, some representatives of the MSME industry have raised concerns with the package, particularly on the size classification of enterprises and implementation of reforms.

“They have kept it up to Rs 100 crore. So what happens is that if we want to join hands with an international player, we are very small in front of them. If any company which has a turnover of more than Rs 100 crore is considered a corporate, how will we survive in front of companies that have turnover and investment of Rs 5,000 crore,” Salunkhe added.

On disallowing global companies from participating in government tenders up to Rs 200 crore, Vipul Ray, Vice President, Indian Electrical and Electronics Manufacturers Association, called for states to introduce structural reforms, too. “These are structural reforms and if the same policy is implemented by the state, only then we will see the benefits. Till then, the benefits will be very partial. Because only if the central PSUs follow the norms and states do not, not much will change. We hope that the states will follow suit,” he said.