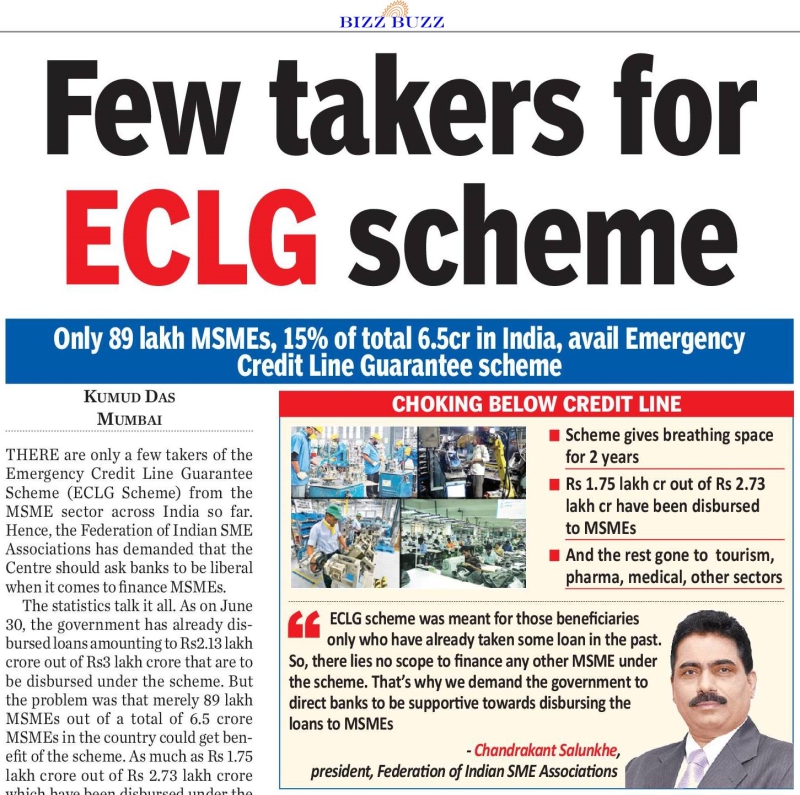 There are only a few takers of the Emergency Credit Line Guarantee Scheme (ECLG Scheme) from the MSME sector across India so far. Hence, the Federation of Indian SME Associations has demanded that the Centre should ask banks to be liberal when it comes to finance MSMEs.

Again, keeping in view the large number of 6.5 crore MSMEs in the country at present, 89 lakh constitute merely 15 per cent, which speaks volumes of the entire episode.

The balance amount of loan has gone to other sectors like tourism, pharma, medical among others. There lies another problem here. The scheme was meant for those beneficiaries only who have already taken some loan in the past and there are only 89 lakh MSMEs who have taken some sort of loan from the banks so there lies no scope to finance to any other MSME under the scheme.

"That's why we have raised a demand from the government to ask the banks to be supportive towards disbursing the loans to MSMEs," Chandrakant Salunkhe, president of Federation of Indian SME Associations, told Biz Buzz. He was talking to this correspondent, after meeting the Narayan Rane, Union Minister of MSMEs, on July 13.

"We have urged the minister to ask the banks to be supportive towards MSMEs and extend loans as per their requirement without any hurdle," he said. Salunkhe hoped that the government may ask the banks to do so immediately after the ongoing monsoon session of Parliament was over.

By being supportive, he means that banks can go for restructuring and rehabilitation should be done on priority basis by either reduction of rate of interest, waiver of penalty or even moratorium in case of MSMEs.

The Government had announced the ECLG Scheme to help MSMEs with additional funding requirements during the Covid-19 crisis, particularly to meet their operational liabilities, purchase raw materials, and restart their business, this scheme is being implemented through the National Credit Guarantee Trustee Company (NCGTC).

The Government on March 24, 2020, increased the minimum threshold for default from Rs 1 lakh to Rs 1 crore to initiate the corporate insolvency resolution process under the Insolvency and Bankruptcy Code, 2016 (IBC). This amendment is expected to benefit MSMEs that have been under financial distress due to the economic damage caused by COVID-19.

Talking about it, Salunkhe said that everything is under the process and it will take six months for us to know the full outcome. Still, I can tell you that so far 20,000 MSMEs have been benefitted under the scheme.

The Micro, Small & Medium Enterprises (MSME) segment has been playing a remarkable role in the emergence of the Indian economy. The development of MSME segment is extremely critical to fulfill the national mission of financial inclusion and generation of significant levels of employment across all geographical areas across the country.

It can accelerate and assist development of new age entrepreneurs who have the potential to create extensively competitive businesses from India. India’s GDP is expected to touch 8.5 per cent, with the country likely to be a $5 trillion economy by 2025. Industry leaders suggest that MSME is that one segment that has been majorly contributing in the economy and has the potential to emerge as a backbone for this economy. MSMSs would potentially act as a driver for growth if given the right set of assistance and enabling framework.

Internationally, the MSME segment expansion has shown mixed feedbacks the basis on various policies and initiatives undertaken by developing and developed economies during their critical economic span. Many developed and developing economies have agreed upon the fact that the MSME segment constitutes the backbone for maintaining growth rates as well as employment generation rate and provides stability during economic downturns.

The recent change in definition for MSMEs by the government was a significant step according to which, an enterprise qualifies as a micro, small or a medium enterprise depending upon the amount of investment made with respect to plant and machinery in case it undertakes manufacturing; or equipment in case it provides services.

Additionally, the prescribed investment thresholds for being included within the definition of MSME have also been increased. The Government ECLG Scheme to help MSMEs with additional funding requirements during the Covid-19 crisis, particularly to meet their operational liabilities, purchase raw materials, and restart their business, this scheme is being implemented through the National Credit Guarantee Trustee Company Limited (NCGTC).

"Certainly, it is a very positive step by government and good impact of ECLG. Since launching first Rs3 lakh crore utilised by borrowers and bankers, in view of its success, next phase also introduced with increased exposures. Overall good impact and credit picked up. Once credit picked the purchasing power increases and economy never goes to recession and inflationary economy goes on," said Dr Ajai Agarwal, advisor, SME Chambers of India for AP & Telangana States.

ECLGS has been the lifeline of MSMEs as it has given the required breathing space of two years (as per Resolution 2.0 framework) to revive the activity. This could be the only way to save MSMEs to face the difficulties and gradually recover from the losses/disruptions without being classified as NPA, said Agarwal, who currently works as Vice President Corporate Relations for CBSL Group of companies.

Commenting on increase in default amount under IBC, he said that in view of increase in default amount to Rs1 crore unnecessary litigants and threats to corporates reduced drastically. Production goes on in stressed accounts also which improvement the GST collection to Rs 95,000 crore, which itself is a proof of improving the MSME sector activities and they are in a position to repay their liabilities and start their activities in a very smooth manner.

Another highlight remained the rapid advancement in digitization which is driving changes in payment systems in transactions.

The Chamber is a Private Organization and Registered Under Section 25 of The Indian Companies Act, 1956.
Copyright Â© SME Chamber of India.All Rights Reserved.